TAKING IT OUTSIDE SINCE 2003 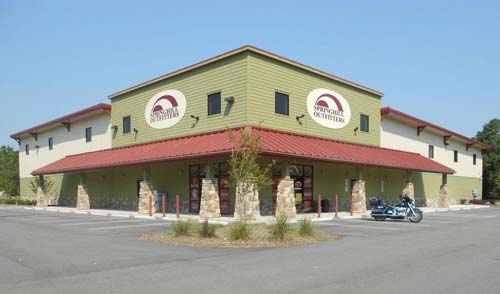 Starting an outdoors store had been a dream for some time for Founder Eddie Scott and his wife Wanda. In October of 2003, their dream became a reality when he opened the first location of Springhill Outfitters on his farm outside of Kenly, NC.

Trent Lassiter started working part-time when Springhill Outfitters was established back in 2003. Trent along with Mr. Eddie's son Brandon Scott, built a new building back in August 2011 and moved Springhill Outfitters to its current location outside of Selma, NC. Located right on I-95 at exit 101, the guys increased the walk-in traffic tremendously as well as added much more retail space for the business.

Upon Mr. Eddie's retirement from the business in 2017, Trent became sole owner of Springhill Outfitters. Although it's not a "family-owned business" as it once was, Trent has continued to keep that same small-town, family owned mentality with the business today. We pride ourselves in our customer service, competitive pricing, and friendly staff. The pro staff at Springhill Outfitters enjoys the outdoors just as much as you do. By using the products that we sale, we can provide the answers to most questions you may have. With over 17,000 square feet of space, Springhill Outfitters tries to carry everything the outdoorsman could need including apparel, archery gear, cooking equipment, firearms, hunting supplies, and more.

Contact us today at 919-351-0764 or sales@springhilloutfitters.com with any questions you may have. We also invite you to stop by the store anytime you are in the area. As always, Springhill Outfitters...let's take it outside!